1955  August 28  Emmett Till,  a 14-year-old African American boy from Chicago was abducted in Mississippi. He was beaten, had one eye gouged out, and was shot in the head in retaliation for “paying too much attention” to a white woman. http://www.youtube.com/watch?v=1-X4is9jMYk 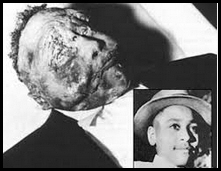 1955  December 1  Rosa Parks and the Montgomery Bus Boycott (December 1, 1955 – December 20, 1956).   Rosa Parks was arrested for refusing to surrender her seat to a white person and the ensuing boycott of the buses by African Americans culminated in a Supreme Court decision declaring the Alabama and Montgomery laws that segregated buses to be unconstitutional. 1954   Brown vs Board of Education  The US Supreme Court rejected separate white and colored school systems and by implication overturned the separate but equal  doctrine. 1957   The desegregation of Little Rock Central High School   Nine African American students sued for the right to attend the public high school. President Eisenhower deployed the 101st Airborne Division for their protection, but the students were still spat on and harassed by the white students. At the end of the 1957-58 school year Little Rock closed all of its public schools, rather than continue to integrate. Only one of the nine African American students graduated from Central High. 1957   Some chapters of the NAACP began to arm themselves for self-defense. The first was the chapter in Monroe, NC led by Robert Williams. When Klan night riders attacked the home of NAACP member Dr. Albert Perry in October 1957, Williams’ militia exchanged gunfire with the stunned Klansmen, who quickly retreated. 1960   February 1   Greensboro Sit-ins  – Four  young African American men sat at the lunch counter of Woolworth’s in Greensboro, NC and refused to leave. This eventually led to the Woolworth  department store chain being forced to reverse its policy of segregation  in the South. 1961    Freedom Riders began riding interstate buses into the segregated South to challenge the non-enforcement of the Supreme Court’s decision that the segregation of public buses and the facilities in bus terminals is unconstitutional. When these buses arrived at terminals in southern cities the riders were brutally attacked and some of the buses were set afire. http://www.youtube.com/watch?v=66_kqSG6aHI 1962   September  James Meredith integrated the University of Mississippi, becoming its first African American student, on a campus that looked more like a battlefield than an institution of higher learning. (He was later wounded by gunshot during the March Against Fear.) 1963   June 12   Civil rights activist Medger Evers was murdered, shot in the back by a Klan member who was hiding in the bushes by the driveway of Evers’ home. 1963  August 28  March on Washington for Jobs and Freedom  An estimated 200,000 to 300,000 demonstrators gathered in front of the Lincoln Memorial, where Dr. King delivered his famous “I Have a Dream” speech. While many speakers applauded the Kennedy administration for the efforts it had made toward obtaining new, more effective civil rights legislation protecting the right to vote and outlawing segregation, John Lewis of the SNCC took the administration to task for not doing more to protect southern Blacks and civil rights workers under attack in the Deep South. After the march, Dr. King and other civil rights leaders met with President Kennedy. While the Kennedy administration appeared sincerely committed to passing the bill, it was not clear that it had the votes in Congress to do so.  After the assassination of President Kennedy, President Lyndon Johnson used his influence in Congress to bring about much of Kennedy’s legislative agenda. 1963    Sept 15   Klan bombing of 16th Street Baptist church in Birmingham, Alabama, resulting in the deaths of 4 young girls attending Sunday School.  The  lesson that day was “A love that forgives.” http://www.youtube.com/watch?v=q-MuWDsv5pg 1963  November 22  President John F. Kennedy assassinated in Dallas. 1964    Freedom Summer Campaign and the murder of James Earl Chaney (Afro-American), Andrew Goodman (White), and Michael “Mickey” Schwerner (Jewish)  The three civil rights workers were shot at close range by members of the Ku Klux Klan and local Mississippi law enforcement officers.  The three had been working on the Freedom Summer  campaign, attempting to register African Americans to vote. Goodman and Schwerner were both shot in the head. Chaney was tortured before he was shot three times. When the bodies were finally discovered, forensic evidence suggested that Chaney may have still been alive when buried. 1964   Cassius Clay took the World Heavyweight Boxing Championship from Sonny  Liston. Shortly afterward he became a Muslim, joined the NOI, and changed his name to Muhammed Ali. A controversial and polarizing figure during his early career, Ali came to be greatly admired for not only the skills he displayed in the ring but also the values he exemplified outside of it: religious freedom, racial justice, and the triumph of principle over expedience. 1964  June 12  Nelson Mandela jailed for life for resisting apartheid in South Africa. 1964   July 2  President Lyndon Johnson signed the Civil Rights Act  that banned discrimination based on “race, color, religion, or national origin” in employment practices and public accommodations. 1964  December 10  Dr. Martin Luther King, Jr. received the Nobel Prize for Peace. 1965  February 25   Malcolm X assassinated Malcolm X was a  Muslim minister and activist   Authored many books, the best known is The Autobiography of Malcolm X 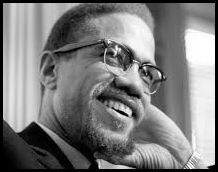