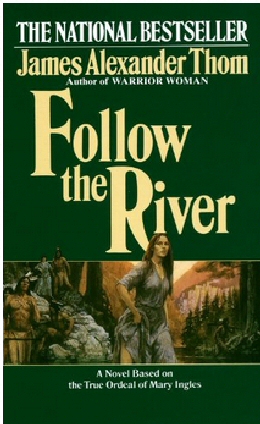 I should be ashamed to admit that I only recently discovered this author when one of his books (Follow the River) and then another (The Sign-Talker) were discounted and advertised on BookBub. I look forward to reading more, despite how demoralizing an experience that is for an author of historical fiction who is not named James Alexander Thom. Never mind the amount of research this man does – that could easily result in a stunningly boring book. But in Thom’s fictionalized novels he uses that research to put you so deeply inside his character’s experiences and mindset that there’s no avoiding the cliché – he makes you feel as if you were there. Follow the River depicts the true story of Mary Ingles, who was captured by Indians during an attack on her settlement, escaped months later, and walked home through a thousand miles of wilderness. The Sign-Talker tells the true story of half-Shawnee, half-French George Drouillard, who was hired by Lewis and Clark as hunter/guide/interpreter for their expedition. I’ve read two history books about the Lewis and Clark expedition and can’t claim to remember much about any of the characters involved. This book is different – I will not forget Drouillard or the images of Merriwether Lewis, William Clark, and many other members of the expedition and the tribes of Native Americans they met, as seen through Drouillard’s eyes.

From “The Lonely Tree”

When Tonia went down to throw out the trash one evening, she saw Rina…Readmore
May 10, 2017
Next Story »

For a moment she imagined the forlorn figure she must present – draped in black,… Readmore
July 30, 2017
Yael Politis
Photograph of library in banner courtesy of House Beautiful, Photography by William P. Steele