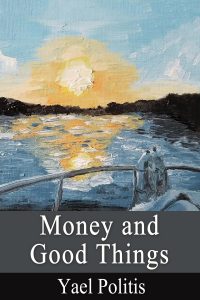 Olivia Killion Nickel had a spacious, well-lit workroom out back, in the offices of America House, their publishing company. Even so, she insisted on keeping her old worktable where it had always been, in their bedroom, pushed up against the wall under the front window. It was nothing but an old door lying across two sawhorses and now mainly served as a place to toss her clothing while undressing. But it was here that she had first begun writing and illustrating books and she refused to let Nick (her husband, Harlson Nickel) dispatch it to the barn. A coat rack would never be the same.

She had risen before five that morning, bristling with nervous energy. She went for a long walk, pulled a bucket full of weeds from the vegetable garden, prepared breakfast for Charlie and her daughters and sent them off to school. Then she consumed enough coffee to make her even more jumpy, while frying bacon and eggs for Nick. She fibbed to him – claiming to have already eaten – and did her best to hide her anxiety from him. Who are you kidding? she thought. He’s no dumbbell. He knows perfectly well who’s coming today. But he said nothing before going out to his office.

She sighed and followed him out the back door to America House, where she retrieved the as yet unedited proof of the Andrew Jackson biography. She brought it back to her bedroom, shoved the clothing on her table aside, and sat staring at the pages. But with Nick safely out in his office, there was no one to pretend for. So she surrendered and stared out the window, frowning as she strained to distinguish every sound coming from the road. All of Detroit seemed to be riding past her boarding house that morning, but none of those clopping horses’ hooves turned up her drive.

Honestly, Michelle, she thought, why on earth didn’t you have enough brains to ask Mourning what time we should expect him? Could a message be more useless than, “He’s gonna come out here sometime tomorrow?” Nine whole years. I haven’t laid eyes on him for nine whole years. Mourning Free. He’s going to come up the drive any minute. Mourning Free. Poor Nicky, awaiting the arrival of Charlie’s colored father – the phantom he considers his indomitable rival.

It was Michelle – Olivia’s close friend and the junior director of America House – who always drove Olivia and Mourning’s son, Charlie, to the Black Second Baptist Church in Detroit. It was there that Mourning came to pick him up. A few days or weeks later, she also drove back downtown to bring Charlie home. But yesterday, along with Charlie and two proofs from the printer, Michelle had also returned with a startling message from Mourning. He was staying in Detroit for a few more days and wished to come out to the boarding house and speak with Olivia.

It was a beautiful spring morning, not a cloud, but Olivia gazed out the window remembering slush and snow. She’d always hated the cold, but back when Mourning had lived in this house, winter had seemed an especially dreary season. From January to April, Mourning had seldom risked climbing through the window she left unlatched, for fear of telltale footprints in the snow or soggy mud. Nine years ago. It seemed longer. A different lifetime. A different world. She sighed, remembering how she had longed for his tap on the glass. Does he ever think of me? I wonder how he looks now, nine years older. She’d never dared to ask Michelle that question. Lord, I hope he’s not in some kind of trouble. I wonder how I’ll look to him. She resisted the impulse to rise and study herself in the mirror. She knew her waist had grown thicker after the birth of each of her daughters, but had steadfastly refused to even consider one of the new corsets, with their steel boning and metal eyelets in the back. However, she had never joined in with the abolitionists to protest that peculiar fashion. She shook her head and made a face when they declared that the constrictive undergarment had been designed to engender a slave mentality in females. She simply thought they were damned uncomfortable. Besides, Nick had never expressed a longing for his wife to have a narrow waist. The opposite. He sided with those who claimed that being encased in a tightly laced cage all day would likely compromise the fertility of women, if not worse. It might cause their internal organs to stray to unnatural locations. Now Olivia almost wished she had one. What is it that people are always saying? You only get one chance to make a first impression. Lord, I don’t want him taking one look at me and thinking, I am so lucky I left when I did.

Almost exactly nine years ago, sometime in the middle of May, 1848, Mourning Free had gone slinking off, without so much as a goodbye. Simply disappeared. Then Nick had appeared out of nowhere, bringing a completely different kind of love into her life – including their two daughters. Since then Olivia had been too busy to for daydreaming, except when she went out deer hunting, alone in the silent woods. Then Mourning Free had crept back into to her thoughts. That smile of his was rare, but once you’d seen a flash of it, you longed to watch it spread across his face again. Olivia would have done anything to make Mourning happy – but in the world they lived in, that had never been in her power. He must be happy now, she thought. Now that he’s a doctor. Who would have thought? Educated, helping people. Why did I never do more than just teach him to read? What was the matter with me, to think that would ever be enough?

She always pushed those thoughts away, reminding herself how much she loved Nick and what a wonderful life she had with him. Which was true. It was also true that there was no point in moping about Mourning Free. Mourning could never have been with her the way Nick was. He might walk down the street with her, but always lagging slightly behind, and God forbid a finger should brush up against her. And it’s not just because of the way the world is. Mourning is nothing like Nick. It isn’t in his nature. Not even a black wife would be able to get Mourning to talk with her, the way Nick does with me. Still, Mourning…She smiled, remembering the scrawny, shirtless, nine-year-old boy who’d come trudging out of the river to disturb the tea party she was having with her doll. Then he’d grown into a handsome young man who finally agreed to be her business partner, to come out to Michigan and help her claim her uncle’s old farm. Her best memories were of him out by the fire, playing his harmonica. And, later, of him whittling toys for Charlie. Her smile grew wider, remembering the way he’d mockingly called her “Miz ’Livia” whenever he thought she was getting too bossy.

Wiping away a stubborn tear, Olivia sighed and turned the pages of the proof of the Andrew Jackson book. It was her favorite of their Presidential series for young adults. Smiling again, she remembered how she and Nick had argued over it.

“Don’t you think you may have been a tad too scrupulous about showing both sides of the man?” Nick had been holding the manuscript, pacing about the kitchen while she was washing the dishes. “Do we really need to shine a light on his terrible temper? The duels he fought, the soldiers he had executed? His wholesale slaughter of Indians? Not to mention the questions raised about the legality of his marriage. Do you really think that’s suitable reading for impressionable young minds?” He’d let the proof fall to the table with a thud and waited for her to respond.

“You’re the one’s always bragging about publishing the unvarnished truth.” She’d turned, hands clenched in loose fists, and flicked her fingers open, giving him a tiny shower of dishwater. He dramatically wiped the drops away, before his face rearranged itself into the expression that always softened her up. She stepped forward and put her arms around him. “What was it you said the other day? ‘The truth is still the truth, no matter how much we might dislike it. Or how inconvenient it might be.’”

He placed his palms on her cheeks, his face close to hers. “Ah, but is it wise – or necessary – to tell all of the truth?”

“Well, of course it is.” Olivia gently removed his hands, kissed the end of his nose, and stepped back. “Anyway, it makes for better literature. Complicated characters are way more interesting than cardboard cut-outs. Andy Jackson may have been capable of clobbering a rival with a two by four, but he was also General Andrew Jackson, without whom the United States would have stopped at the banks of the Mississippi. Now that’s a story to get you thinking about people. About life. About the way the world works.”

“Yes, it is.” Nick sighed. “Maybe it’s too bad we didn’t stop at the Mississippi. At least then Americans wouldn’t be slaughtering each other down there on the Kansas-Missouri border.”

Olivia ignored her husband’s last remark and spoke in her imitation of a southern drawl. “Besides, everyone who ever knew the man said he was the most charming and courteous southern gentleman.” She paused to flutter her eyelashes before reverting to her regular voice. “As long as he wasn’t shooting you or bashing your head in.”

“Do you know how many people in Washington hated him?”

“Good for him. Those nobs are nothing but a bunch of stuck-up numbskulls who never have and never will give a dead rat about folks like us.”

“And you believe Andy Jackson did?”

“He knew what it was like to have nothing, didn’t he? To be no one and have no one. The man had a heart. Look at the way he cared for his wife. That’s a great love story. And the way he took in that little Indian boy, raised him like his own. I know, I know. His troops were probably the ones who killed the boy’s parents.” She waved a hand. “Contradictions. The man was full of contradictions. But he got things done, didn’t he? His troops would have followed him anywhere. Those fools in Washington – you know why they hated him so much? Because they knew that not a one of them could have defeated him, not on a battlefield and not at the ballot box. Not in their prayers and dreams.”

At that Nick had raised both palms and turned aside. “All right, all right, I surrender. I see Jeremy finally managed to convince you about the virtues of the great Andy Jackson. But the first print run is only going to be a hundred copies. Total. For Detroit and Chicago and back east.”

“You’re the boss of that.” She smiled. “But why do you waste so much energy worrying about money? Business keeps getting better and better,” she said, and then added hesitantly, “Doesn’t it?”